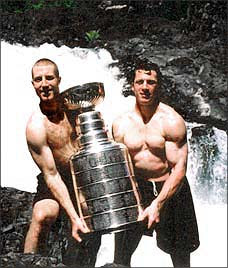 Any hockey fan knows that Rod "The Bod" Brind'Amour is a fitness fanatic. While he's a smart 2-way centerman with good on-ice vision, his strength has always been that he's stronger and possess more stamina than just about any NHLer to ever lace on a pair of skates.

While we know most NHLers are quite fit, Brind'Amour's elite level of fitness does contribute to the other more "mental" aspects of the game. Most players make mistakes when they are tired, and can't chase down errant pucks when they are sucking wind. Brind'Amour and others of his type make fewer mistakes and can make more plays simply because they have more gas in the tank.

If you already didn't feel enough like a coach potato, the Globe and Mail has another article showing you how Brind'Amour works about 1,000 times harder than you, and how other players adopted similar trends to keep up with ... well, each other.

The captain of the Carolina Hurricanes is one of the fittest players in the NHL because he refuses to stop exercising. He turned 38 over the summer and still has three years left on a contract he fully intends to play out.

Brind'Amour typifies the character needed to be a veteran in today's NHL. In the past, some believed that longevity was best achieved by taking extensive time off over the summer to let the body heal before essentially starting anew during training camp.

“It's definitely a year-round job,” Brind'Amour said during a recent interview. “I think the guys that approach it that way are the ones that last the longest.

“Especially with the amount of money guys make now, if you don't treat it year-round you're foolish.”

Chris Chelios is nearing 50, and he's still known for his insane workout schedule. There is obviously some benefit in keeping the engines running year-round.

What is amazing is that these guys can work insanely hard year-round and their bodies just don't break down. You'd think Brind'Amour's body would just say 'ENOUGH!' and shut down from the physical onslaught.

I think one attribute that isn't talked about enough is that some human bodies are just blessed with superior physical construction to others, like Lance Armstrong and his huge heart, or Michael Phelps and his myriad of physical features that help him swim faster (Double-jointed chest, for one).

I know that my body produces a high amount of urea (blood/muscle waste, in simple terms) that makes it hard for my body to recover from physical activity. When I used to work 4-6 times a week, my body simply refused to put on muscle, and I would sometimes ache for days after a workout. Simply put, I could never keep up this type of schedule and expect to be in top physical condition in the long run.

Brind'Amour (and Chelios) should get full credit for his work ethic, but nature obviously gave him a boost that some other humans just can't match, even if they wanted to. Perhaps there is something in their blood that can be measured, and teams looking at potential draftees might want to be on the lookout for in blood measuring or gene testing becomes the norm.

Comments:
"Perhaps there is something in their blood that can be measured"

There was something in my blood that let me work out intensely more than normal humans without getting fatigued. Luckily for me I never tested positive for it.

Whether Rod Brind'Amour's season ends in June, April or February, one thing always remains constant -- he starts training for the next one as soon as he can.

An interesting discussion is worth comment. I think that you should write more on this topic, it might not be a taboo subject but generally people are not enough to speak on such topics. To the next. Cheers 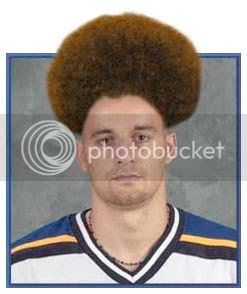